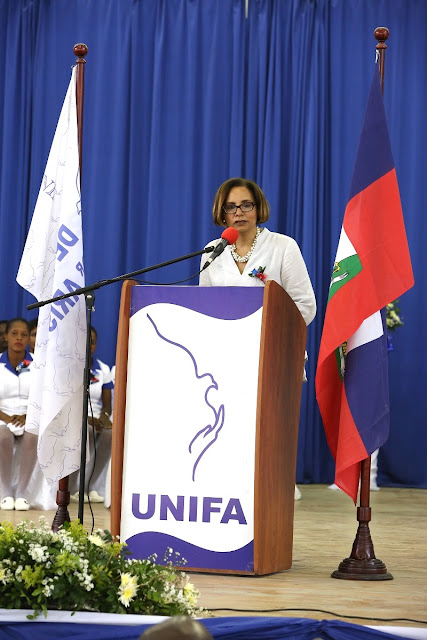 Let me start with some background.  Titide [nickname for Aristide] created the Aristide Foundation University (UNIFA) in 2001.  It was an extension of the Haiti-Cuba cooperation in health care.  Instead of sending Haitian students to med school in Cuba we would train more doctors and health professionals in the country.  We broke ground on the campus in 2002.  By 2003 the first phase of construction was completed; approximately 247 medical students began classes.

Early February 2004, the university teaching hospital, Hopital Universitaire de la Paix, opened.  Then there was the coup d’etat.  While Titide and I were forced from our home and the country, UNIFA students were forced from the campus.  University classrooms and dorm rooms were transformed into military barracks by soldiers of the multi-national force deployed to Haiti.  Remarkably, most of the students made their way to Cuba and completed their training.  When the earthquake struck on January 12, 2010, some of these young doctors staffed emergency clinics at the Foundation auditorium; two are part of our staff at UNIFA.

In the month before we returned to Haiti, Titide [former President Jean-Bertrand Aristide] wrote: “A year on [from the earthquake], young people and students look to the Foundation’s University to return to its educational vocation and help fill the gaping national hole left on the day the earth shook in Haiti … I will return to Haiti to the field I know best and love: education.”

Education has always been at the center of his life work – as teacher/priest, creating Lafanmi Selavi (center for street children), his writings, social justice activism, tenure as Haiti’s first democratically elected president, his scholarship in South Africa.  And today, he brings all of that to UNIFA.
http://haitianalysis.blogspot.com/2015/04/haiti-solidarity-interview-mildred.html

Beginning in the late 1990’s Cuba began to send doctors to Haiti, and opened its medical schools to Haitian students. In 2001, the Aristide Foundation for Democracy took this cooperation one step further by opening a medical school where medical professors from Cuba and elsewhere trained Haitian doctors in Haiti. Unlike other medical schools in Haiti, this one recruited medical students from poor families. Talented young people from rural Haiti had previously found it nearly impossible to attend medical school.

By 2004, 247 future doctors were studying medicine at UNIFA and a School of Nursing was scheduled to open in the fall of 2004. The 2004 coup d’état brought this progress to a halt. UNIFA faculty went into exile or hiding, students were forced off the campus, and UNIFA was closed. Despite this hardship, nearly all of UNIFA’s students were able to complete their medical studies in Cuba. Today they make up a significant portion of Haiti’s next generation of doctors – many worked tirelessly assisting victims after the earthquake.

A Year of Rebirth
The reopening of the Medical School at UNIFA took place against a backdrop of a still shattered Haiti—over 80% of higher education institutions were destroyed or damaged by the 2010 earthquake. Some argued that reopen- ing was premature, but on the other side was the fierce desire of young people to begin now. The earthquake interrupted or ended thousands of students’ educations. Young people looked around their ruined city and saw few signs of reconstruction. UNIFA’s buildings were still standing. How could UNIFA say once again:

Wait until next year? Certainly, Haiti cannot wait for more doctors. Haiti’s population is growing, the country is facing the worst cholera outbreak in the world, and health inequities continue to widen.

On his return to Haiti in March 2011, after seven years of exile in
South Africa, former President Jean-Bertrand Aristide promised to dedicate himself to education and reopen UNIFA, the University established by his Foundation in 2001. On September 26, 2011 the Medical School of UNIFA reopened its doors, welcoming an outstanding new class of 63 men and 63 women chosen from a pool of over 1,000 applicants.

UNIFA Opens a School of Nursing in Its Second Year, Aristide Foundation for Democracy website (2013)

You can also donate by mailing your tax deductible donation by check or money order payable to our fiscal sponsor at:

Make check payable/money order to East Bay Sanctuary Covenant. And note on your check that your donation is for HERF/Friends of UNIFA

Learn about our fundraising campaign to raise monies and materials for the construction of a UNIFA teaching hospital/medical center on the UNIFA campus where the students will gain practical experience alongside some of the best medical professionals in Haiti. The UNIFA teaching hospital/medical center will provide medical care to those who otherwise cannot access quality medical care or provisions.

UNIFA, University of the Aristide Foundation

UNIFA, the University of the Aristide Foundation